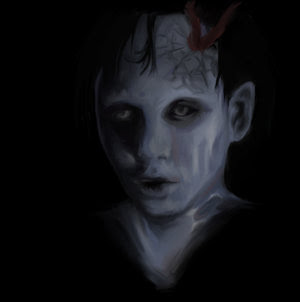 The wagon came to a screeching halt right in front of the huge palace gates. Twelve stood guard. He remembered the days he used to guard these very gates. He got off and stood with his chin held high, gawking at the splendour and majesty of the spotless white palace outer walls. The palace was huge, and he knew none could ever match this one.

He once lived here. He had to know...

The guards frowned as he walked past them. They knew they weren't supposed to be mean, but they couldn't help it. But then again, they reckoned it was okay to be mean once in a while, more so with this uninvited visitor.

Walking past the palace gardens and courtyard, he encountered a thousand glares and angry stares. He didn't mind it. He was used to it now. It didn't make him wince one bit. On the contrary, he felt a sense of power.

As he entered the visiting area and sat himself on the huge satin-cushioned chair meant for Guests of Honour, he looked around at the cordon that was awaiting the arrival of the master.

A few minutes later, one of them announced the entry of the "Master" and they all bowed down in unison.

Unless of course the "Master" welcomed him back to the fold.

The Master came out to a loud welcome from his servants. He walked briskly to his huge chair, opposite the Guest chair. Without looking even once at the Outcast, he said with disdain.

"I have just 2 minutes. Tell what what it is that brings you here once again."

"Here's the list of all those who've been convicted this quarter. Its been quite a task. Lots of guilty ones these days."

"Of course, of course. You do enjoy your job don't you?"

"If you could be a little less harsh on me, I'm only doing a surveillance job. I'm more like a law enforcer, ready to swoop on anyone who goes against your will. Am I not still serving you this way?"

The Master looked away, "Is that all?"

"What about the Amnesty I requested for? How long before I get it?"

"You really think you're going to get it? You don't deserve it"

"I don't? I've served you for ages...All I do is commit one so-called 'mistake', and I'm banished for life? You forgive those newbies inspite of their hundred misdoings before finally deciding to crack a whip on them, and I get no chance for redemption at all? Is that Justice?"

"You were never supposed to make a mistake. You knew that didn't you?"

"No redemption for me? No amnesty?"

The Master simply got up and walked away without saying a word. Three guards quickly walked towards the Outcast and with their eyes, showed him the way out.

The Outcast took a long walk out of the palace. He stepped into his waiting wagon, and like always, made a promise to himself to prove it one day to the Master, that he is not the most undeserving. More convictions the next time, he decided, and revised his targets.

Its not easy being the Devil. And its never easy to negotiate with God.

The Devil gets no Mercy.
Now Playing : Iron Maiden - Hallowed Be Thy Name
Im waiting in my cold cell when the bell begins to chime
Reflecting on my past life and it doesnt have much time
Coz at 5 o'clock they take me to the gallows pole
The sands of time for me are running low

When the priest comes to read me the last rites
I take a look through the bars at the last sights
Of a world that has gone very wrong for me
Can it be there's some sort of error
Hard to stop the surmounting terror
Is it really the end, not some crazy dream?

Somebody please tell me that I'm dreaming
It's not so easy to stop from screaming
But words escape me when I try to speak
Tears flow but why am I crying?
After all I'm not afraid of dying
Dont I believe that there is never an end?

As the guards march me out to the courtyard
Somebody calls from a cell, "God be with you"
If there's a God, why has he let me die?
As I walk all my life drifts before me
And though the end is near I'm not sorry
Catch my soul coz its willing to fly away

Mark my words, believe my soul lives on
Please don't worry now that I have gone
I've gone beyond to seek the truth
When you know that your time is close at hand
Maybe then you'll begin to understand
Life down there is just a strange illusion.

This song is about a prisoner who's being sent to the gallows. He's probably been wrongfully convicted. He reflects about his past life, and regrets having placed faith in divinity. He goes through a myriad of emotions, experiencing both fear, and also claiming he's not scared of death. The song ends with him being executed, but not before he says "The Lord's Prayer" in earnest hope of an Afterlife.

Email ThisBlogThis!Share to TwitterShare to FacebookShare to Pinterest
Labels: STORIES