BLAME IT ON THE DARK

This post has been published by me as a part of the Blog-a-Ton 31; the thirty-first edition of the online marathon of Bloggers; where we decide and we write. To be part of the next edition, visit and start following Blog-a-Ton. The theme for this month is 'Strangers in the Night' 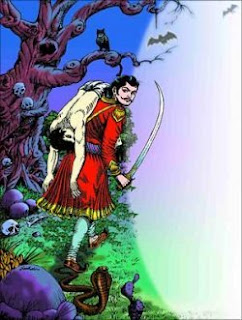 Dark was the night and weird the atmosphere. It rained from time to time. Gusts of wind shook the nearby forest. Between thunderclaps and the moaning of jackals could be heard the eerie laughter of spirits. But King Vikramaditya held his nerve. Braving extreme fatigue and a throbbing headache, he walked towards the ancient tree once again. It was pitch dark, and he could barely see his own nose in whatever little light the moon could afford. Nevertheless, after struggling for more than ten minutes, he climbed the tree and reached out for the corpse that hung from it. Ignoring the corpse's violent protests, he brought it down. In keeping with the usual routine, he flung it over his shoulders and walked towards the cremation ground for the umpteenth time.

However, as soon as he began crossing the desolate cremation ground, the spirit that possessed the corpse said, "Pardon me, I have a really sore throat, so you're gonna have to pay a little extra attention tonight. I'm sure I've said this to you a million times already, but I can't understand what your aim is. What do you seek from me? It is pitch dark, and you & I can barely see anything. Aren't you afraid of the dark?"

The King merely shook his head in a horizontal motion to indicate that he wasn't, careful not to break his vow of silence. He kept walking.

"I don't intend to be rude, but your back smells like shit. When was the last time you had a bath? You seriously need to gome home."

The King was tempted to say 'My back smells like crap coz it's you who's been piggybacking me a million times.' But he kept mum.

The spirit continued, "Alright, without further ado, let's get back to business shall we?", in a tone that sounded like he was teasing the King.

The King nodded in the affirmative.

"Very well then. Adinath from Maynagadh had seven livestock animals - three goats and the rest cows. He had a policy of milking only one animal per day. In a week's timeframe, what is the probability of Adinath having milked a goat? If you know the answer and still keep mum, your head will be blown into a thousand pieces."

The King was annoyed. He thundered back, "Hey, time out mister! This ain't fair! You're not supposed to ask me mathematics and statistics-based questions! And where's the story?"

The corpse was stunned. He leaned over the King's shoulder to take a look at his face.

Their eyes met for the first time.

"Which tree?", the corpse asked in an irritable tone.

"That's about a dozen trees from mine.I'm from 39A - Statistics"

An awkward silence dwelt over the strangers in the night thereafter, as the King carried the corpse back to its creepy abode.

Picture and background of the main write-up thanks to Chandamama Comics - www.chandamama.com

The fellow Blog-a-Tonics who took part in this Blog-a-Ton and links to their respective posts can be checked here. To be part of the next edition, visit and start following Blog-a-Ton. I've participated in 3 editions so far.